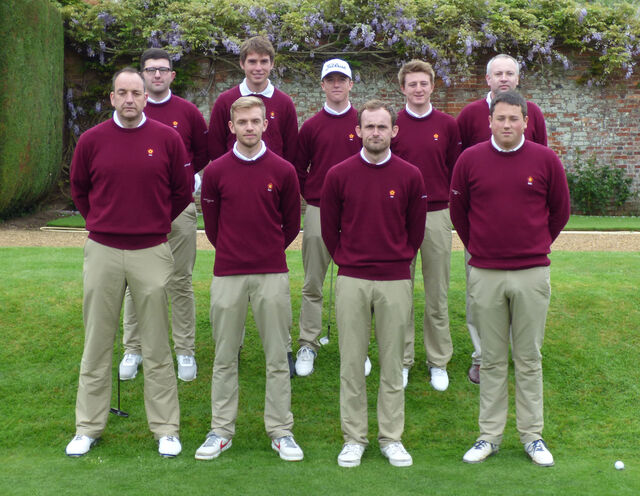 With sun predicted, the day started chilly and cloudy as we teed off at Wellingborough Golf Club, our Foursomes pairings were:

The course was playing quite tough with the rough particularly punishing, but the greens were in excellent condition resulting in plenty of birdies for both sides.

Pairs 3 and 4 started quite slowly for Northamptonshire, the last two pairs had to come back from 5 down and 4 down and with the shift in momentum, we hoped to come into lunch 4-0 up, but that didn't quite materialise so we were happy to be in command, 2.5 - 1.5 up

At lunch, Captain Greg Croxton shuffled Paul Godding to anchor and moved Matt up the order, so it shaped up as:

As we sat at the 6th green, it was not looking promising as 7 of the 8 matches came through reporting that they were down, however, from then on, things turned in our favour and by the 12th, we could see where we were likely to be making the 4 points needed for victory. With Callum Farr winning 5 holes on the bounce, from 11 to win 5 - 3 and securing 2 points on the day, including a monster 350yard drive and an 8 iron to the par 5 12th, followed by Ben Jones, Matt Myers and Miles Mudge going down 18 1up and all 3 winning 2up to secure the victory, followed by Anchor Paul Godding winning 3-1.

Congratulations to Ben, Callum and Paul Godding on winning 2 points each on the day.

Altogether, a great performance from the Northamptonshire team, everyone played solid golf and we always looked in control of the match.

Paul Godding at the 4th

Miles Mudge on the 3rd

Paul Hodgkiss on the 4th

Matt Myers on the 5th

Matt Myers with an aggressive play on 16

Ben Jones tidying up the match on 18