The 2 nd match of the Anglian League season took place in the grounds of Harrowden Hall, at the beautiful Wellingborough Golf Club.

With some changes to the team selection from the May match, we welcomed for the first time to Men’s County Golf Robin Williams (Peterborough Milton) and following a good event in the NGL Open, Charlie Salter (Northamptonshire County) maintained his place from the recent Eastern Counties Foursomes. The final change saw Tom Forster (Wellingborough) in the team, on his return from a very successful college season in America.

Practise and preparations were completed on Saturday afternoon with the support of county first team coach Shane Rose and the players arrived on Sunday morning ready for action. A morning of warm sunshine and light breezes welcomed the players and officials of both counties.

The morning foursomes began with Tom Forster partnering Liam McNeela (Northamptonshire County) against one of the most capped county players in the Lincolnshire ranks in Simon Richardson and his partner Sean Marshall. This match was in Northants hands for most of the morning, being one up through 6 and 11 holes. But the closing stretch at Wellingborough is demanding and playing the last all square, a Lincolnshire birdie led to a 1 hole defeat. In truth this was the first time all morning any of the four Northants pairs were behind!

Playing second, Ryan Connolly (Wellingborough) and Michael Farr (Priors Hall) mixed the sublime and ridiculous to good effect, again always in control of their match, being 2 up after 9 and 3 up after 13. This being County golf, you know the match is never over until hands have been shaken and this was the case again as the Lincolnshire pair picked off a couple of holes to force the match down the 18. Two high quality shots from the Northants pair left a 2 putt from some 25 feet for the match. Comfortably converted, the match was now at 1 game all.

Out third were the exciting pairing of Charlie Salter and Robin Williams – these two started hugely impressively with birdies at 1, 3 and 5 to be 4 up through 6 holes. This lead was maintained with experience that defied their ages. Losing only one further hole between that point and shaking hands on the 16 th green, an impressive 3&2 victory!

The final pair for Northants saw Fraser Carnihan (Cold Ashby) and Mikey Chambers (Overstone) – these two are becoming a stand out combination and they too got off to a hot start, 3 up after 6. Again maintaining this lead through the remainder of the front 9, with solid par golf meaning the Lincolnshire pair had to push hard to win holes. Having got one hole back by the time the players reached the 17 th tee, a closing bogey 5 would be enough for the Northants pair to win the hole and take a 3&1 victory into lunch.

A hugely impressive mornings work by the team and as I mentioned earlier, 3-1 was the worst score possible and all those watching proceedings had been impressed by the quality of golf played by the home team. 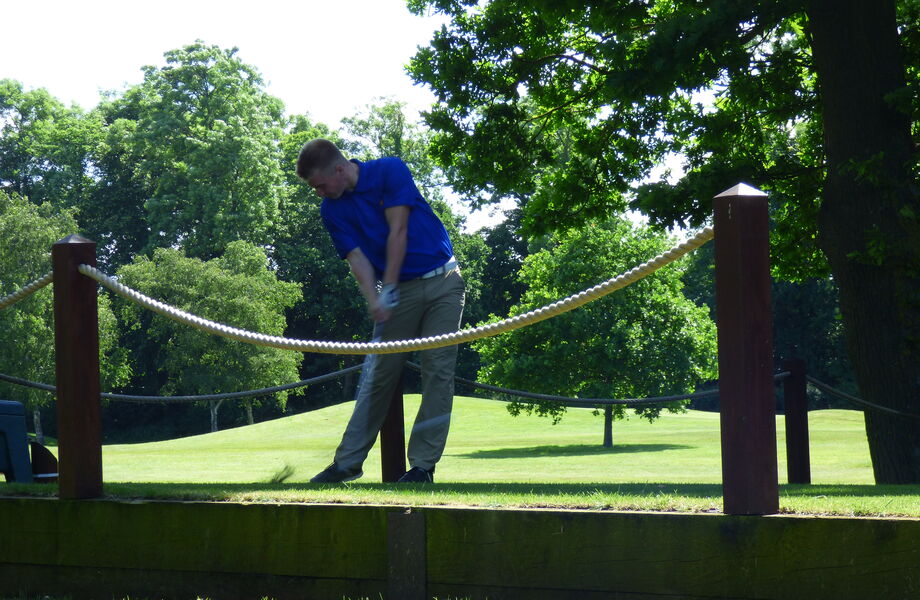 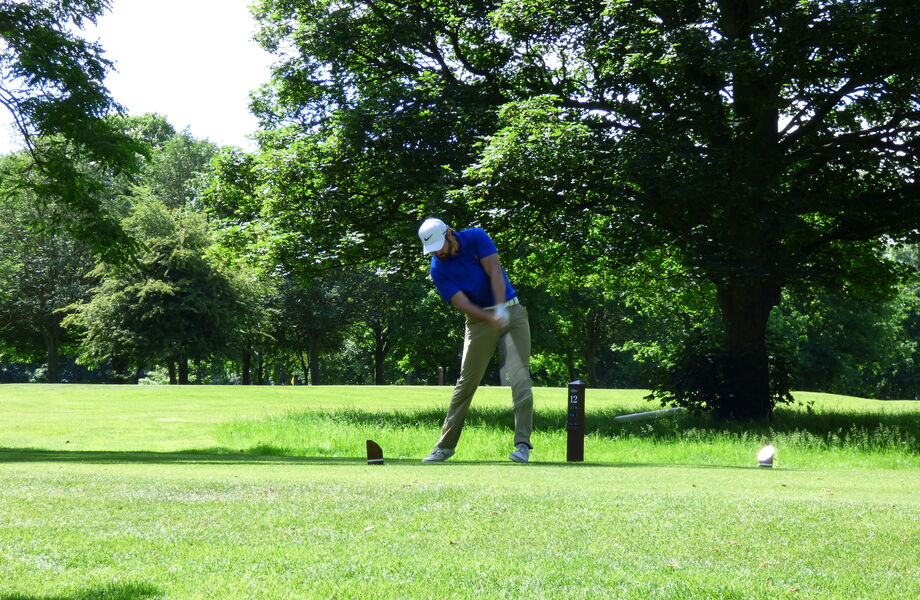 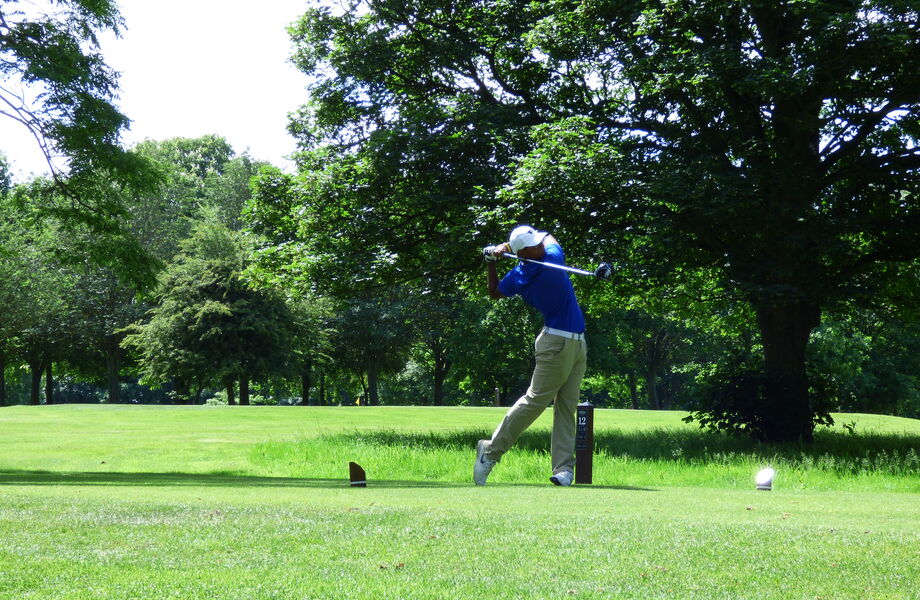 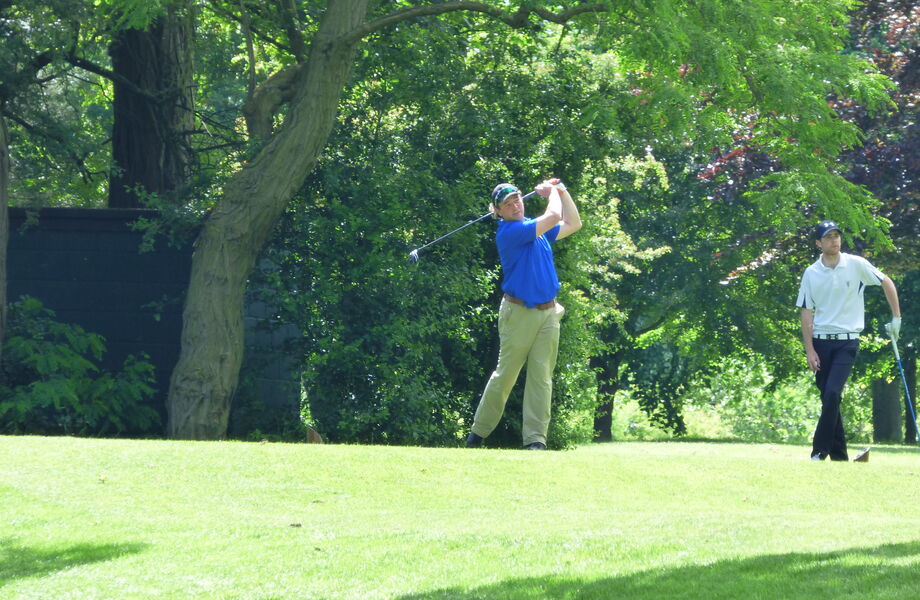 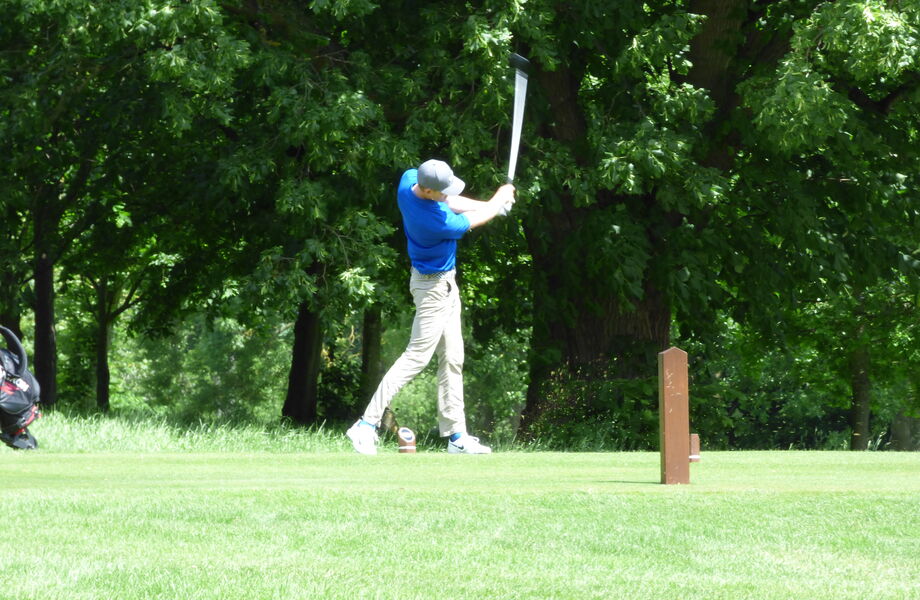 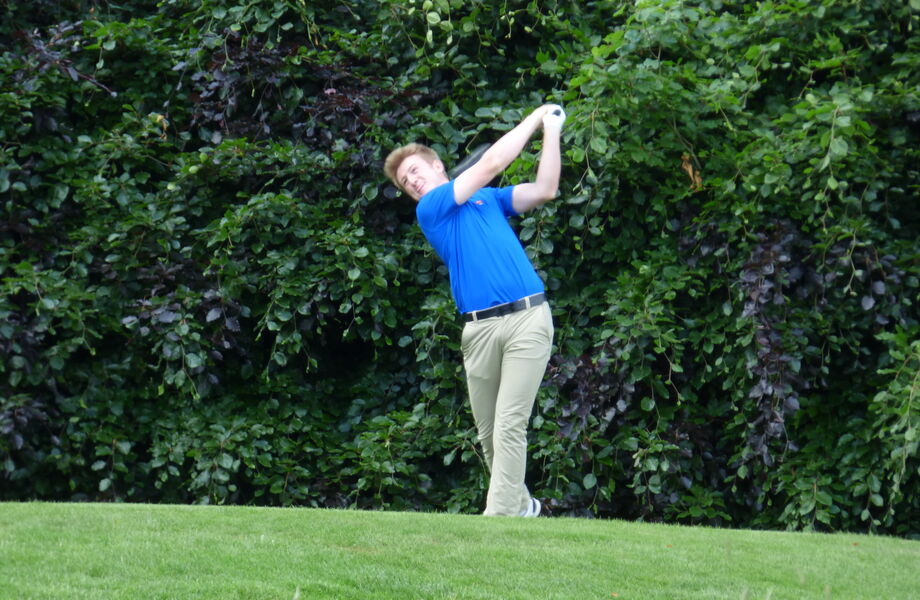 The afternoon singles began with what promised to be a high quality affair, Tom Forster taking on Simon Richardson. And the match did not fail to deliver, the quality of golf being played meant these two were barely seen by the watching support, skipping round the front 9 in 80 minutes. At this point the match was all square and a ding dong battle ensued on the back 9, with birdies traded almost every hole. On reaching the 16 th tee, Tom had got himself a 1 hole lead a lead which he doubled on 16 and played 17 well enough not to lose the hole and shake hands on a 2&1 victory. Simon commented afterwards that he was 5 under par and lost and it was one of the best singles matches he had been involved in for many years, since the days of a chap call Ryan Evans….this is high praise and Tom had shown his class all day!

Following Tom was Robin Williams playing against Sam Done. Throughout the front 9 Robin played some fantastic golf, losing the 9 th hole to be 2 up on his opponent. However, as can happen so often in matches at this level, Sam ‘found something’ at the turn and the calibre of golf he played on the back 9 saw him turn a 3 down defecit after 8 holes to a 3&2 victory! Obviously Robin was disappointed, but this will be valuable experience for Robin as he continues to advance in the game of golf. At 15 years old, he has a remarkably calm understanding of the game, not to mention a golf game to go with it!

At 3 and 4 Michael Farr and Ryan Connolly were kept close together following their morning win. However neither could keep up the momentum of that win, losing holes early, leaving too much work to be done to get back into the match. Michael did manage to get back to all square after 9, but lost 2 holes before making birdie on 15 to get back to just one down. However losing the pivotal 16 th hole, like we had on a number of occasions during the day, left him dormie two down. Winning 17 is ultimately very difficult when your opponent makes a solid par, Michael did all he could but did not manage the three required to take the match down the last.

Ryan’s match always looked hard work! These matches are tough at the best of times, but even more so when you are battling your swing! After a couple of traded holes early, Ryan was 1 down after 6. By the 12 th tee this gap was up to three holes, despite every effort Ryan could not gain back any of these and his match ended on 16.

So 4 singles matches complete, now the score was 4-4.

In match 5 Charlie Salter produced his customary tenacious golf. A highlight for me of this match was his miraculous pitch from well beyond the 11 th green, to a back flag location! Earlier on in the match Charlie had also lost 2 of the early 6 holes to be 2 down. This was still the score at the turn. Playing against the vastly experienced Matt Haines, this match also looked like it was going Lincolnshire’s way. But true to form, Charlie clawed back holes during the back 9 and the match reached the 18 th tee, with a one hole advantage to Matt. Charlie’s tee shot and second shots were better than his opponents and Charlie would end holing a 2 footer for the hole win and a well earned half from his match!

Mikey Chambers in match 6 produced a fine display that matched the quality of the morning golf. Getting up early in the match and pressing home that advantage each and every time he got the opportunity. When you match high quality ball striking, with an assured touch on and around the greens, there is usually only one outcome. An outstanding day’s work from Mikey, with two victories to his name!

In matches 7 and 8, Fraser Carnihan and Liam McNeela had mixed fortunes during the early holes, being 1 down and 1 up respectively after 6 holes. It’s generally at this point that the last two matches are rather forgotten about while the early matches reach their conclusions….after 11 holes both players were now behind, Fraser 1 down and Liam 2 down. It is probably fair to say that both players might have been one hole better off, had it not been for outrageous ‘pitch ins’ from their opponents. But, we have always said to expect the unexpected at this level! After all county players are the best amateur golfers in the region!

It was also at this point that the weather changed and a very heavy shower came across the golf course, obviously making conditions hard for the players, but also the supporters!

Fraser’s match reached the 17 th tee 2 down, so needed to win both holes. In terrible conditions, Fraser’s tee shot and 2 nd shot found the middle of the green, his opponent, Jazz, short of the green by 30 yards. Unfortunately after a tidy pitch, Jazz holed the resulting 6 foot putt to close the match out. For the first time all day we were behind in the match….

All attention turned to Liam, the hero from the first match at Norfolk. His position was similar this time to that last game, being 2 down with two to play. Another fairway finding tee shot and long iron approach from Liam was good enough to win the hole, as his opponent played his way up the 2 nd hole, adjacent to the 17 th and could do no better than a 6. This left the situation clear to everyone still watching, a hole win from Liam would result in the overall match being drawn. Leaving himself an awkward but not impossible second from the left side of the hole, Liam’s approach shot came up just short and trickled back down the slope. Leaving a 30 foot putt, his opponent had played two shots to 15 feet, on the right level of the green. Liam’s putt came up agonisingly short of the hole, on the now much slower greens due to the weather – the hope then was for a three putt from his opponent. In all reality this was never going to happen and the match finished with a one up victory and an overall result of 6.5-5.5 to Lincolnshire.

After such an impressive display in the morning matches, Northants Captain was full of confidence going into the afternoon matches. Lincolnshire captain, Steve Bratton had, on several occasions during the morning, waved the white flag, due to the quality of the golf on show. This result proves that no match is over until all matches are finished. A lunchtime lead of 3-1 is not as big as it appears! I have no doubt the team and I will learn from this and we will be better and stronger for it, come the next match on the 2 nd of July against Suffolk.

The Northamptonshire players can be extremely proud of their commitment, effort and conduct during the day, just require a little stronger killer instinct maybe….