Both our 1st & 2nd Team Captains were tested to find players available for this match due to a clash of 4 club championship which gave the line ups with different faces than before.

Our team consisted of:

Whittlebury course has suffered from the heavy rain over the past weeks and the match was played with placing on the fairway, the rough was best kept out of if possible due to the wet conditions of it.

The foursomes were fairly even after the front nine, the back nine with some excellent play from Andy & Jack we secured our first point.

Tom & Luis were two up playing the 17th Tom hit the green and finished 6ft from the pin Cambridgeshire found the water our second point.

Chris and Ian had a hard fought match resulting in a halve with Cambridgeshire taking the last point.

After the morning foursomes it was 2 & 1/2 point Northamptonshire to Cambridgeshire 1 & 1/2th.

The afternoon saw our team with confidence and determination to put the first win on the board this year.

Ian was our lead off player but was up against it from the off with his opponent having 5 birdies on the front nine eventually loosing 4 & 3 our middle order was playing steady with the opposition making mistakes off the tee and around the greens with Andy, Jack & Mark comfortably winning their matches.

Chris & Luis had battled back from being down in the matches only to lose 1 down (Luis who is just 14 will be one to watch in the future with great shot making, he fought back from 3 down with 4 to play).

The last two matches were pivotal Tom was 2 up playing the 17th when the Cambridge player put his tee shot in an impossible position on the side of the bunker and Tom played another classic iron to 15ft all thought that would secure the match, but the Cambridgeshire player hit a superb shot which teetered on the edge of the hole and just fell in, Toms putt just slid past the hole now this match going to the 18th along with Sam playing the anchor roll were both pivotal in either winning or honours even,

Sam had fought back from 2 down with 4 to play to being all square with two to play. Sam's tee shot on the 17th was excellent especially under pressure putting it to 10ft, his opponent made an error of rolling off the fringe into thick grass around the hazard resulting in a 4 conceding the hole with Sam & Tom 1 up playing the 18th a win was secured.

Obviously Tom and his team of players were highly delighted with the result especially taking into considerations the conditions of the course and pin positions that tested them all, the team camaraderie our players showed whether winning or losing by supporting each other was a credit to Northamptonshire Golf. 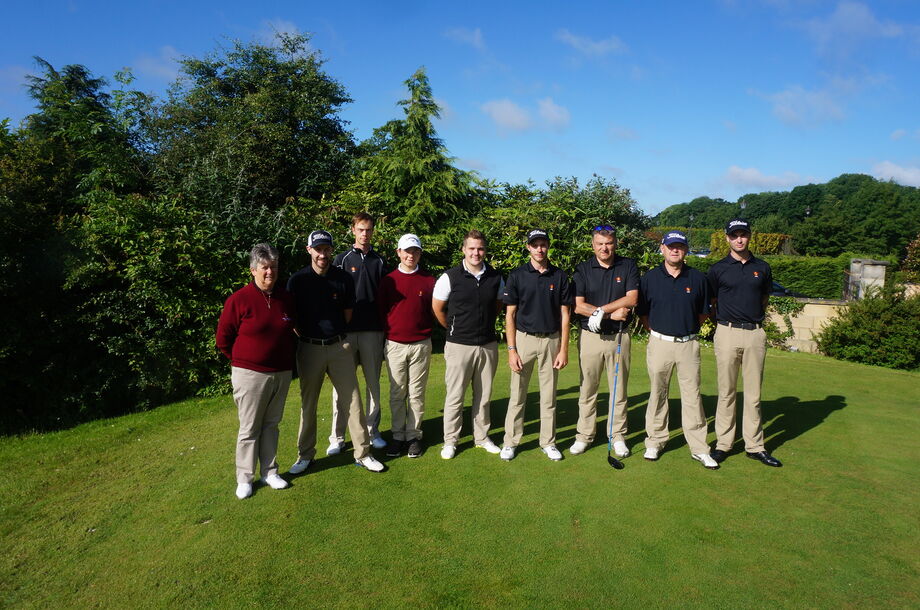