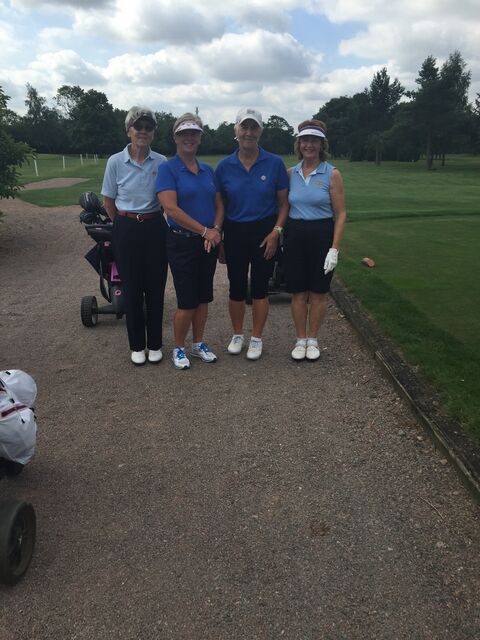 Captain Gina Evans(21) filled in at the last minute to play with Sandy Burgess (22) also from Overstone Park and they started really well by winning the first two holes. Their opponents Carole  Almond (26) and Chris Prattley (20) then began to pull back but still Gina and Sandy held on to be 3 up by the 12 hole. However, Chris got a par on the 13,a  birdie on the 14 and Carole parred the 16 with a shot so it came down to the last two holes and unfortunately the home pair won by two holes.

The second pair of Janet Leitch (23) and Barbara Stone(20) both from Elton Furze played a very close game against Julie Streeton(20) and Julia Hodson(25) and matched to finish their game on the 17th to win 2 and 1.

Karen Fitzpatrick (19) and Marwyn Watson (18) both from Nene Park enjoyed playing the course and found their putting stroke right from the start and managed to win their match against Margaret Theakston (18) and Kathy Emmerson(26) 5 and 4.

Our Secretary Liz Waine(20) and fellow Wellingborough lady Pat White(25) were drawn to play against the Leicestershire Captain Barbara King (22) and Alison Terrington(19) a member of Glen Gorse and although the game was close in places the advantage went to the Leicestershire pair who won 3 and 2.

Our 5th pairing of Chris Beeby (19) and Joan Dunn(17) both from Northampton G.C. fought until the 17th hole and lost 2 and 1 to a strong pairing of Joan Preston(20) and Lyneve Mcloughlin(21).

Karen Johnson (17) from Oundle G.C. and Diana Wells (24 ) from Northants County played the vice captain Drina Terzza (20) and Kay Pole (25) and although Karen was giving 7 shots to Kay and 3 shots to Drina the Northamptonshire pair were able to win the match 2 and 1.

The next match was more closely matched with only a few shots being given and our two ladies from Pytchley Lodge Jane Ashby (22) and Judy Burdett (23 ) were beaten 4 and 2 by Judy Matharu (21) and Avis Webb(24).

This meant the score was 4 games to 3 in favour of Leicestershire. Our last pair, both from Northants County Geeta Patel (23)and Cecilia Edwards (17) were up against Julia Dunkley (18) and Linda Watts (25). Geeta and Cecilia were 1 up coming to the 17th hole and Geeta played a magnificent shot onto the green and sank the putt for a birdie which gave the Northamptonshire pair a win 2 and 1.

It was a delightful way to finish our last match with an honourable half and to look forward to next year's match when the Leicestershire ladies will be welcomed to Priors Hall G.C. in 2017.