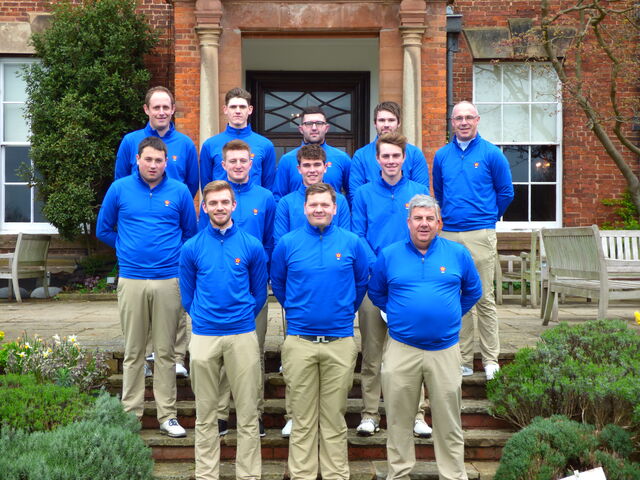 On a bright, warm and sunny day the pre-season matches started with a game in the grounds of the well-presented Edgbaston Golf Club, in the centre on Birmingham.

The morning foursomes got off to a very positive start, with all 5 Northamptonshire tee shots being fired, high and straight down the centre of the fairway. It became clear from early on, that the team and players that could handle the early season greens the best, would likely come out on top in each match. That being said, there was some truly fine ball striking from both teams all day.

Northants were soon under pressure in the first foursomes match, with the excellent Max Martin and partner Liam Phipps proving to be much more consistent on the greens than Brothers, Michael and Callum Farr (both Priors Hall).

Matches two, three and four were tight throughout the morning and until a burst in the middle of the back 9 from Liam McNeela and Sam Henfrey (Northants County) in the second match, saw that game fall in our favour in the 16th green.

Matches 3 & 4 both went the full distance, with both Northants pairs in front standing on the tee. Match 3 was probably most memorable in the morning for some fantastic play from the tee boxes from both Ryan (Wellingborough) and Taylor (Kingsthorpe) – this consistency wore down their opponents and a safe and sound par 4 at the last could not be bettered, for a 1 up victory.
Match 4 was a similar story – the untried pairing of Fergus and Mikey gelled extremely well and very few errors led to the match coming down to the last green – two fine shots into the heart and a finely holed 12 inch putt from Mikey to assure the 1 up win.

Of all our morning pairs, Chris and Miles were probably finding the greens the most challenging….again despite some excellent long game work this game slipped by 3&2 and our experience ‘at the back’ had been beaten.

The morning finished with Northants leading 3-2. The captain and Team Manager, Mike Gilbrook then set about trying to come up with a masterplan for the afternoon singles.

Having been so impressed with the long game in the morning, Ryan Connolly accepted the challenge of a move to the top of the order – knowing that it was highly likely he would be up against Warwickshire’s best player. With Ryan at the top, the singles order was designed to split the experience through the 10 players.

As well as the morning singles opening tee shots went and were a signal of what was to come, the afternoon singles did not start as well – Ryan’s only poor swing of the day led to a loss down the first, followed by an excellent birdie 3 down the 2nd, leading to an early 2 hole defecit. Sargeant followed Connolly in the order, with Callum and Michael Farr following on behind. Throughout the front 9 it became clear that the singles matches were not going our way – with Callum looking in control, rather than in command, the three other leaders were finding the going tough. Ryan falling to Max Martin on the 14th green, with Taylor’s match finishing at the same time, close by on the 13th.

This led to the realisation that our middle and lower order would need to deliver – news quickly made its way round (thanks to the social media group), that Fergus had started his match in extraordinary fashion – he lipped out for a birdie on the 7th green, for a win, that would have seen him lead 7 up!!

2 matches further ahead Mikey Chambers had carried on his excellent ball striking day to be leading by a couple of holes through the front 9, Sam Henfrey looked in control of his match and Liam was in the middle of a ding dong battle, with former England player (and team mate of Danny Willet) Ian Winstanley.

In the final two matches, both Chris and Miles were continuing their struggles on the shorter surfaces…..

Michael Farr finally succumbed in his match on the 16th green, meaning our lunch time advantage and had disappeared, leaving us behind at 5-4. The middle order delivered in impressive fashion with Mikey’s march to a great win on the 15th green, Fergus two holes sooner (though not as soon as he had planned) and news that a burst of excellence from Liam had led to a 4&2 victory had again swung the matches in our favour.

The final few moments of the matches led to defeats for both Miles and Chris (Chris playing his first 36 hole event for some time, following a foot injury) left the match balanced at 7 points each, with one match remaining. The match was completed when Sam could not get up and down from a tricky greenside bunker and therefore his match and the overall matches were halved at 7.5 each.

In truth, over the day, a fair result for the golf that we had seen. The Northamptonshire Captain was delighted with the days work, using a variety of new and ‘old’ players, there were some real shining lights on the day. Graham was keen to point to victories in both matches to the three debutants, no doubt giving some selection headaches when the league matches begin in May.