The second match of the Anglian league campaign came hot on the heels of a disappointing weekend at Seacroft – for the first time in long enough the Captain was able to field a team with no changes, other than leaving 2 players out from the team that travelled to Skegness. Not in the 8 for the match against Norfolk, were 2nd team captain Chris White and fellow Peterborough Milton member Tom Burgh.

A second consecutive home match at Wellingborough golf club, gave us the chance to make up, not only for Eastern but the defeat at home to Leicestershire in May.

After the recent rain, the golf course was in fine condition and the weather could not have been better for golf – warm sunshine and barely a breeze to speak of. 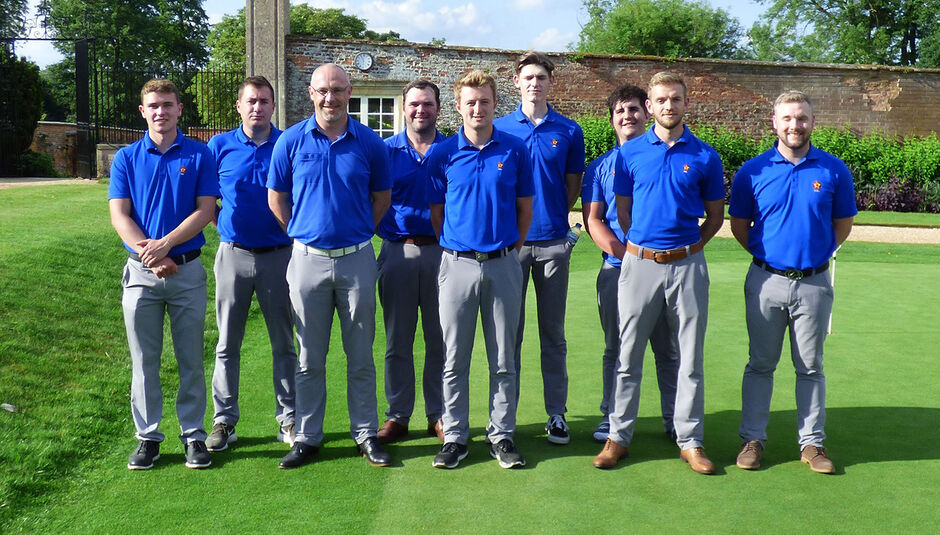 Through the early stages Jamie and Miles in match 1, spent far too much time in the new Wellingborough bunkers and consequently could not keep pace with a new, young Norfolk pairing. 3 down through 6 holes would be too much to pull back, despite giving everything nothing worked in their favour and further mistakes through the middle of the course would lead to 5&4 defeat and a couple of grumpy faces.

In match 2 Michael and Charlie got off to a flyer, birdieing the first 2 and being giving the 3rd. Michael then struck a beautiful iron shot into 7 feet on the 4th, their opponents hitting it to 30 feet. The Norfolk pair would hole their putt and Charlie could not do the same – which very much kept the Northamptonshire feet on the ground. They would make the turn in 4 up with 2 further birdies. 4 holes later the end came after another birdie at 12 and solid 2 putt par at 13 to win their match 6&5. A very impressive performance.

Match 3 was a far quieter start, with Liam and Mikey losing the 2nd hole but reaching the 7th tee at 1up. This match would continue to swing between this score and all square, with our pair occasionally in trouble but some solid work on and around the greens ensured they did not give too many holes away. They would win holes 15 and 17 to gain a solid 2&1 victory.

In the final match, Fraser and Lee took on the ‘vastly experienced’ pair of Iain Yule and Simon Clark – these two have many, many years experience of county golf and have played much of their career together in foursomes matches.

Thanks to a birdie on 3 the Norfolk pair would reach the 7th tee 2 up and would improve this advantage to 3 up through 11. It has become that this Northants duo start slowly and then fight their way back into the game and today would prove to be the same. on 12, par on 13 and birdie on 14 would balance the match at all square. The Norfolk pair would bogey 15 after finding a very awkward spot near, but not in the greenside trap – Northants 1up.

Somehow, unbelievably (according to the county president, who was stood nearby), Lee managed to find the 16th green from a copse of trees right of the green, which would be good enough to secure a par and a half and after two very solid long shots into the 17th hole, Lee would have about 18 feet for birdie. Norfolk’s chip ended some 25 feet away and when the putt slowly lipped out handshakes were put on a fantastic comeback and 2&1 victory for Lee and Fraser. That would put the morning series result at 3-1 in favour of Northamptonshire.

The singles started with Charlie at 1, followed by Michael Farr, Mikey, Lee, Liam, Fraser, Jamie and Miles. Knowing the 3.5 points would be enough to secure the overall win.

Once all matches were on the course, the Captain set about catching up with the first group. After just 90 minutes the pair were on the 11th tee at which point the match was level – two young players cruising at a pace to be admired, not distracting from quality golf. Giles Evans is clearly a tough competitor and would chip in twice in the match, despite Charlie’s best efforts he could not gain back a couple of lost holes in the middle of the back 9 and would go on to lose o the 17th green.

In Michael’s match, a very solid opening 9 holes, with just one dropped shot to lose the 9th would put him one up at . He would go on to improve this advantage to 2up through 14 and then win 17 to close out his match with a 3&1 advantage – a good day’s work for Michael.

Mikey also gained control of his match around the middle, all square after 8, he would win 3 of the next 6 holes making the most of his advantage off the tee and some really good work on the greens. Winning the 16th hole closed out his match to the tune of 4&2 – another excellent days work!

In match 4, Lee’s game was also very close through the early stages and the match would go the distance, with never more than 1 hole between the players. When Lee’s match reached 17 (1 up at the time), the Captain caught up with the group to find Lee left of the trees on 17, looking like he would need to chip back to the fairway. The Norfolk player was in the fairway. Lee and his caddie (John Gilding) had clearly seen something as Lee could be seen swinging his 5 wood….the Captain raised an eyebrow!!

The shot was sent high into the air, just clipping a leaf and would land about 30 feet short of the flag and roll up to about 15 feet – Lee might be getting a reputation for the incredible!! After a solid 2 putt, the Norfolk player had left Lee the chance to close out his match, but the ball amazingly failed to turn into the holeDormie 1up and at the time, that guaranteed half point was enough to confirm the victory – we’ll come back to Lee on 18 in a minute…

Liam in match 5 had covered the first 8 holes Impressively and was 4 up after 8 holes against the experienced Thomas Nudd. ‘Nuddy’ would gain a couple of holes back over the next few holes and Liam was 2 up on the 13th tee. He would win one of the next two holes and then birdie to close out his match 4&3 – a good singles victory against a very strong competitor.

In match 6, Fraser’s match with Iain Yule was also all square through 8 holes. Fraser made good use of his length advantage on the 12th, having his eagle putt conceded to put him 1up. Continuing his very solid, if not ‘inspiring’ golf (his own words, not mine!), Fraser would hold on to this advantage and then win 17 to claim his afternoon point.

It was at this point that word came in, via the teams What’s App group – that Lee had lost the 18th hole, thank ‘nearly killing a man on the putting green’!! his second shot into 18 hadn’t gone to plan, flying over the green and the out of bounds.

Match 7 – Jamie had the look of a frustrated man coming off the 8th green 1 down. Jamie had been having a few problems with his long game in the early stages, but memories of a tip from Coach Shane Rose appeared to help – winning 3 of the next 4 holes to be 2 up after 12. And a much happier man! Doing all he needed to do over the next 5 holes to gain his point, Jamie would shake hands on solid 3&2 win, a 30 footer on the 16th green.

At the back Mudgie was being knocked about by his opponent, with the match mixing 3 Norfolk birdies and 2 Northants bogies over the first 8 holes to be 5 down. We’ve all had days like this on a golf course, where it really doesn’t matter what you do or try, nothing works. This appeared to be the case for Miles. There is no one in this county who cares or tries harder than Miles and the frustration was clear for everyone to see on this day, despite gaining a hole back after 12, he would lose the 13th and the match on the next hole for a 5&4 defeat – not the day Miles hoped for, but he will be back.

So overall, a very successful singles series, gaining 5.5 points in the afternoon. Meaning the final match result was win for Northamptonshire.

A much improved, overall performance by the team and a much happier Captain at the end of the day!

Thanks as always to everyone at Wellingborough Golf Club for their support, the caterers and – the Norfolk players and officials were very impressed.

The next County fixture is the testing 6 Man event at Coxmoor Golf Club – this is a 36 hole , all scores counting. After that is the next Anglian League fixture, playing at Gainsborough Golf Club, Lincolnshire on the 1st of July.