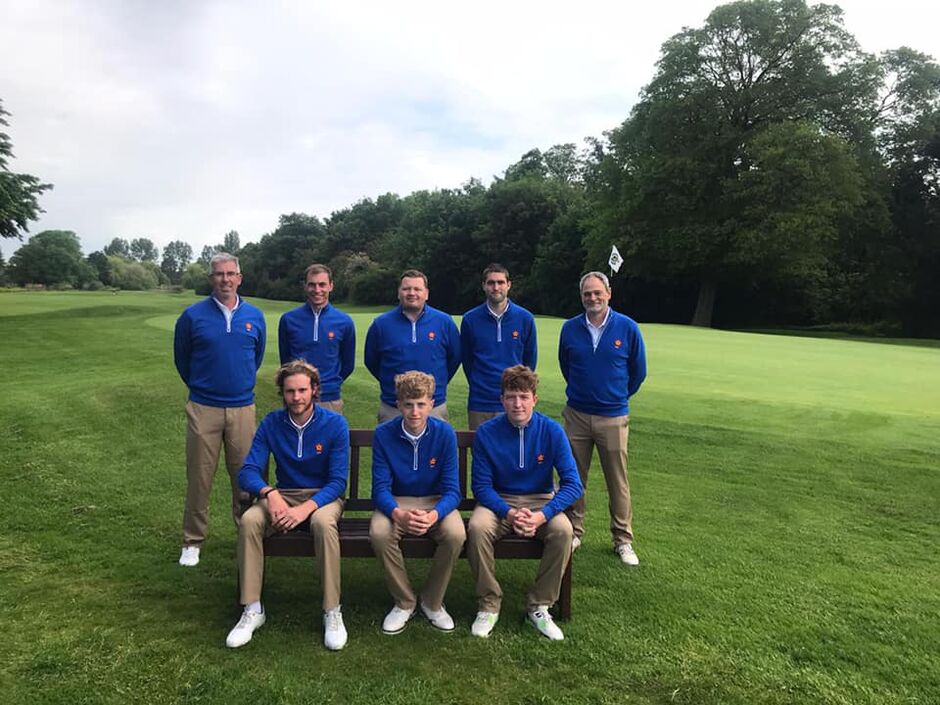 Leading Northamptonshire off in the singles was Taylor Sargeant a regular top of the order player who likes to get his point on the board early. He would take on Cambridgeshire’s James Curran who had also gained a point in the morning. The match was of high quality with no drop shots on the front 9 between them it would be A/S through 9. Taylor patiently waited for James to make a mistake and on 12 it came; Taylor subsequently went on to birdie 13, 14 & 15 to win the match comfortably 4&3.

2nd in the order was James Barker an experienced county golfer who was in good form coming into the game, he was up against hi opponent from the morning, Andy Grimwood. This was a game of experience and good quality golf. James played well throughout the game but sadly a short, missed putt on 13 led him to be 2 down and finding nothing coming in, Andy got the better of him closing out the game on the 16th with a birdie to win 3&2.

The third game was down to our county champion Jensen Parfitt. He was faced with Axel Friberg the other point winner for Cambridgeshire in the morning. Jensen lost the 1st to a birdie but wasted no time dwelling on it, he went on to play 1st class golf and made absolute ease of his opponent going on to win 6&5. 2 points for Jensen on his debut, everyone speaks highly of Jensen and his golf is also something to speak highly of. A first team call up beckons for Jensen, I am sure.

In the fourth went with something slightly different in the middle of this match. We chose to move Richard Dalton up the order from his usual rear end spot. He faced young player Harry O’Shea in this game. A tightly fought game throughout Richard had clawed back from being 2 down, he holed a great putt on 14 from off the green for a half to remain 1 down, he won 15 and he showed his experience and quality on 16 hitting his tee shot to a matter of inches. Good enough to win the hole and he went on to win 17 for a 2&1 win. Great job Dalts.

Match 5 was Northamptonshire debutant Kettering’s Joe Hyde playing Cambridgeshire captain Isaac Rowlands. The game was never close, Joe played some great golf to get a comfortable lead he was 5up with 5 to play. Sadly, it did not go well for Joe at this point, his opponent attacked the course which is make or break on that final stretch at Peterborough. He birdied 14 to go to 4, he won 15 to go to 3 down, 16 Joe hit it into the right bunker, Isaac hit it to about 20 feet beyond the flag, Joe hit an absolutely class bunker shot to a couple of inches from the hole. Pressure on, Isaac holed his birdie putt to go back to 2 down with 2 to play. He went on to win 17 to go back to 1 down with 1 to play. Anybody who has been in this position knows how difficult it is now to hold off the game and close a win with all the momentum being with Cambridgeshire. Joe did close out the last and won the game 1up, what an amazing achievement for Joe, 2 points on the day for the debutant.

Match 6 was down to another debutant Collingtree’s Brandon Sanders was up against George Whitehall. A game played in decent quality, George managed to keep the mistakes out of his game, unfortunately this was not the case for Brandon as some inexperience played vital in this game and he lost the game 2&1. Brandon is a great player who will go from strength to strength in the county and the only way to counteract inexperience is to build experience.

Match 7 was down to Northamptonshire’s Sam Bird. Sam a usual suspect at the back end of a game who will never quit and takes games to the death. He was faced with Olly Brunt a new face in the Cambridgeshire set up. Unfortunately, Sam had exhausted himself throughout this match up and found himself down early and throughout the game. He clawed a couple of holes back but could never quite get over the line, Olly closed the game out 2&1.

The last match of the day was down to Northamptonshire captain Ryan Genner, eager to gain his point for the day having lost his foursomes game in the morning. He was faced against Cambridgeshire’s Dan Knight. The game was close in the early stages however Ryan showed his own experience on the back nine, hitting it to within inches on 11, good enough to win the hole and went on to drop no shots and made light work to close his game out 3&2.

The final match result is 8-4 to Northamptonshire. A great start to the season and sets Northants on their way to contend for the title this year.

The next Anglian league game is against Leicestershire at Longcliffe on the 4th July.