8th May at Holme Hall GC 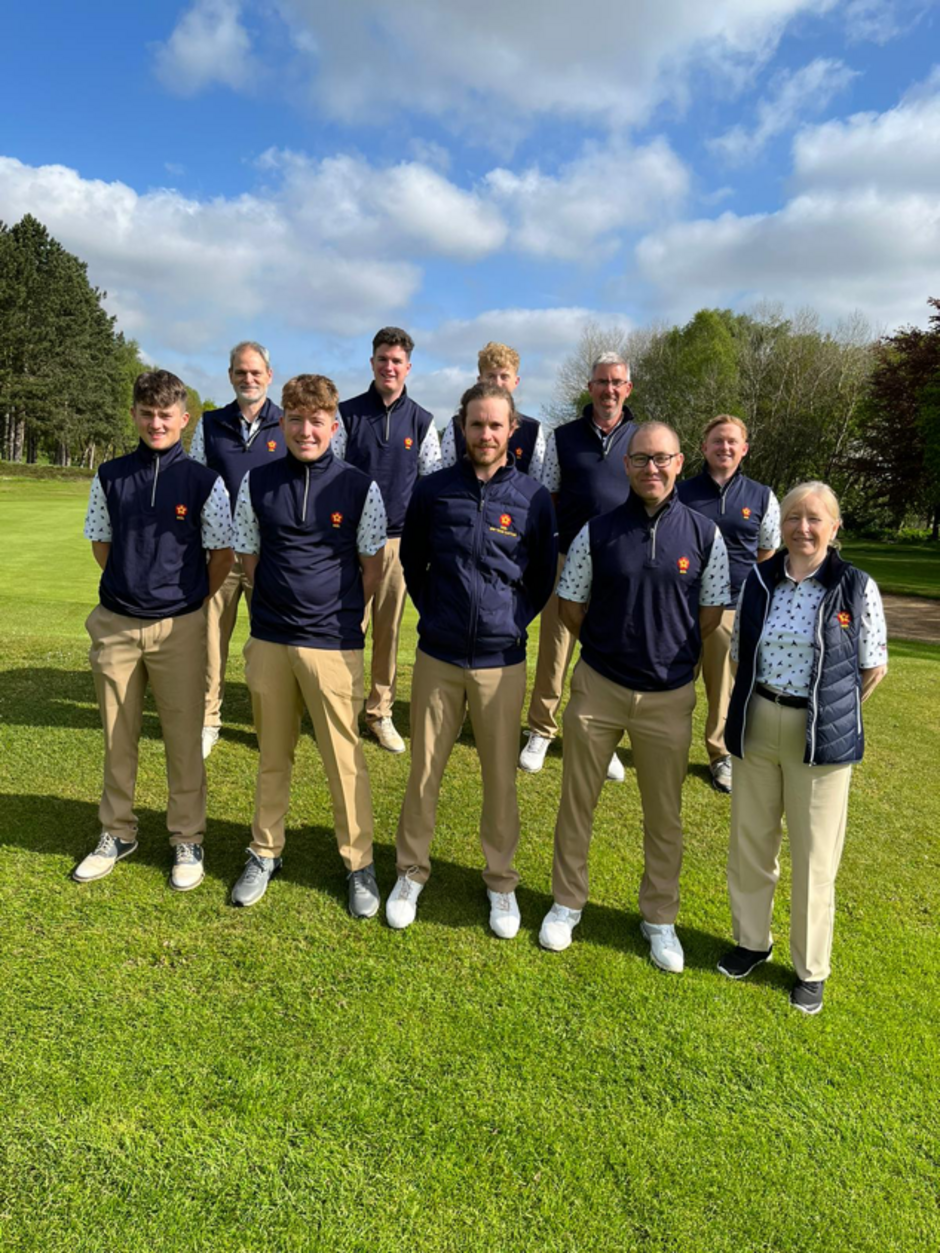 Brandon Sanders and Torin Little started us off in the Foursomes and Brandon hit a great tee shot on 1 and with Lincs finding trouble off the tee we went 1 up. However Lincs birdied 2 to go all square and pars at 3 saw the match level.

Mark Bazeley and Joe Hyde were off 2nd and Mark lost his tee shot to the right to go one down and stayed 1 down after both pairs birdied the 2nd hole.

Ben Lavender and David Sanders made a good start with Ben’s tee shot landing just short of the rough on the left with Lincs finding a tough lie. One up to Northants.

Final match saw Richard Dalton and James Barker make an even start against the Lincs pairing.

Mark and Joe were hit with 3 birdies in a row from the 2nd to go from 1 up to 2 down but a solid par on 5 was good enough for the win and back to 1 down. Ben and David were hit with early birdies to be 2 down playing 5 but a good drive from Ben and a safe 2nd from David to 10 foot brought them back to 1 down.

The 6th proved a problem and both our 2nd and third pairings found trouble to concede the hole.

Richard and James were all square playing 5 and Richard hit a long drive up the left side of the fairway only to find the ball in a large divot. Lincs were in the rough left but a good iron shot saw them win the hole to go 1 up after 5.

We rushed forward to find Brandon and Torin who were now 3 holes ahead by the 10th.

Northants had turned their match round and were 1 up playing 10 and a solid par saw them stay 1 up. On 11 Brandon hit high and long down the right with Lincs down the middle. This was becoming a super match with Toring putting and chipping very well.

Ben and David had gone 2 down but won 7 and 8 to go level but they lost the 19th to a par to go 1 down again. In the firsy 9 holes their had been 7 birdies in a high quality game.

Joe launched a drive down the wrong fairway and somehow Mark found the green with his iron shot and Joe holed a long putt for the win and back to A/S.

In the final match we were one down until James holed a 45 foot putt to win the hole and back to level. |Both pairs parred the 10th.

In a topsy turvey game Mark and Joe won 7 and 8 to get back to level and the 9th and 10th were halved.

In the first match we were 1 down on 15 and it looked like 2 down but Torin holed a 20 footer for par for a half to stay 1 down.

On the 12th Mark came up a few yards short of the green and Lincs were pin high on the edge of the green. Joe then chipped in for birdie to win the hole and suddenly they were 2 up. This seemed to rattle the Lincs pair and more was to follow. A par on 13 was good enough for a win and then a Joe 10 foot putt on 14 saw them suddenly 4 up. A half in par on 15 was enough to see the boys win 4 and 3 against 2 very good players.

Ben and David got a bit rattled in a tense game and went 2 down after another Lincs birdie on 14.

Richard and James were also fighting in a close match and were all square after 12 with James’ putt hanging over the hole. On 14 we lipped out to go 1 down. Pars on 15 kept us 1 down, however brilliant play on 16 saw us win the hole to go A/S with 2 to play.  A drive into trouble on 17 sa w us go 1 down and Lincs finished off on 18 for a 2 up win. Another very close match.

David and Ben kept fighting and were unfortunate to lose 1 down.

In the opening match we were 1 down playing the last and Torin chipped in for a birdi on 18 for a win and half in the match.

Afternoon singles after a Ham, Egg and Chip lunch.

Brandon was first off and he raced round in 2 hours and a half. Brandon was level after 14 but a 3 putt on 15 saw him go 1 down. However he won 16 and 17 to go one up playing the last. His match had ebbed and flowed and he was one up playing the last only to clip a tree and lose his ball. His opponent came out of a bunker and holed his par putt to level the match and A/S was a fair result.

Joe, who had putted so well in the morning, found himself 3 down after 6 and his opponent kept the pressure on and secured a 7 and 6 win.

Torin was level after 6 but found the bunker on par 3 7th and lost the hole to go one down.

David was 3 up after winning 7 with a par.

It was looking very good at this stage although Richard was 2 down after 7 and James was finding his opponent in brilliant form.

Ben was playing some impressive matchplay and was 3 up playing 13 but Ben’s par was enough for him to go 4 up. He eventually won his match 3 and 2.

David had been cruising before Lincs hit 3 birdies in a row to go cut the lead to 1. A half on 13 saw David still 1 up.

Richard was in a real tussle and was 1 down after 13.

James went 4 down early on and despite playing good golf, couldn’t reduce the deficit and evenyaully lost 4 and 3.

Ben and David were unfortunate to lose 1 down in the foursomes but made up for it with 2 good singles wins.

Mark lost 3 and 2 in a match that he looked in control of until birdi barrages turned it around.

Torin ran out of steam late on having fought to keep with his opponent and lost 4 and 2.

In the final match on the Course, Richard was fighting hard to pull back his oppoment but eventually lost 2 and 1 in a super game.

A great effort from the Northants Team in a tough away start to the Anglian League season. Some lessons will be learned and we look forward to playing Suffolk at Priors Hall in June.